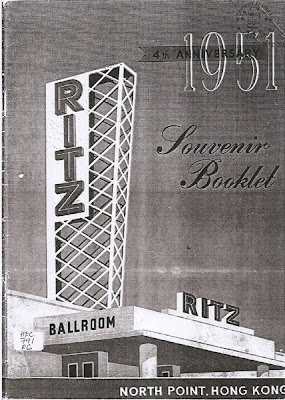 This is the Ritz Ballroom from the cover of the booklet that gave us the Coca Cola ad in the last post. The Ritz Ballroom opened on 5 September 1947 on an empty lot next to the docks in North Point. It was the brainchild of one Mr C.F. Lee who arrived in Hong Kong in 1946 and found the nightlife sedate by comparison with the city where "the nights were so well taken care of by diverse amusements that people never realised night actually exists". The decor was opulent with red plush sofas, oil-paintings and air-conditioning and guests could choose between Chinese and French cuisine with fine wines. Musical entertainment was provided by Eddie Guzman And His Orchestra and singer Cora Ballecer. Eddie Guzman came over from Manila in 1948 and was among the first generation of Filipino musicians, who revolutionised the music scene in 1950s Hong Kong, just as they had in 1930s Shanghai.

Next to the Ritz Ballroom was the Ritz Garden, with Chinese gardens, restaurants, two swimming pools and miniature golf. We don't know when the Ritz closed (we are working on that), but Alice found out that her dad went to the ballroom in the late fifties when it was, he said, past its prime.
Posted by Phil Benson at 10:45 PM

From a newspaper article which described the February 24, 1949 crash of a passenger flight from Manila to Hong Kong, at North Point, Hong Kong, leaving no survivors: Miss Olive "Delores" Batley, 24 year old flight hostess of the ill-fated plane, left the Colony for Manila... Formerly a student of the Italian Convent, Hong Kong, she was a star vocal artiste at the Ritz Garden with Eddie Guzman and His Orchestra before joining the CPA (Cathay Pacific Airways) about a year ago. She was then popularly known as "Delores."

Olive "Delores" Battley was the great-aunt of a friend of mine. I would love to learn more about Olive's brief music career in Hong Kong.

Sorry, I know this is an old post but I just happened to come across it now. I happen to be Eddie Guzman's grandson! Did either Phil Benson or titania happen to know my grandfather?

Have you seen Olives grave in the Colonnial Cemetery? Still bright and beautiful after all these years.

I read up on the incident after I found the grave, and found some information on the crash, and Olives family in HK at the time.

Have not found anything relating to her musical career or Eddie Guzman.

It was certainly a sad end to a promising young life.